The Campaign to Save the EMD Cinema

Waltham Forest’s historic EMD Cinema closed in 2003 when it was purchased by the controversial Universal Church of the Kingdom of God (UCKG), a wealthy international organisation with plans to convert the venue for religious use.

Following a massive local campaign led by the McGuffin Film Society, the government held a Public Inquiry in the summer of 2003 which ruled that the building remained commercially viable as a cinema and should not be converted into a church. Despite receiving at least 12 serious offers from potential buyers, UCKG refused to sell the building and instead left it empty and decaying.

At the beginning of 2009 UCKG unveiled a new scheme to convert the iconic Walthamstow venue into a church. The new proposals envisaged the vast majority of the site being used exclusively as a church with some space adapted to create a small venue for “community hire at commercial rates”.

In March 2009 more than 400 residents gathered to discuss the new proposals at a public meeting organised by the McGuffin Film Society. 100% of those in attendance voted in favour of reviving the EMD as a cinema.

The following month UCKG held an exhibition of their plans and the McGuffin Film Society responded by organising a huge demonstration outside the EMD Cinema attended by over 600 local residents and attracting coverage from television, radio and the international press.

Messages of support were also received from a number of celebrities (see below).

Shortly afterwards, several high profile cinema operators went on the record to confirm their ongoing interest in reviving the EMD (read their statements here). UCKG’s new planning application was published in August 2009 and a Day of Action was organised by the McGuffin Film Society to enable residents to register their objections to the scheme. More than 1000 local people sent written objections to the council for consideration as part of the planning process.

With the EMD issue and UCKG’s plans mired in huge controversy, Waltham Forest Council began 2010 by commissioning a fully independent review to provide a balanced overview of the situation and identify viable solutions for the cinema.

Regeneration specialists Locum Consultants were appointed to undertake a thorough investigation of the case and assess all options for the venue’s future. With the review process expected to last several months, it became clear that no decision on the EMD would be reached before the 2010 parliamentary and council elections.

The McGuffin Film Society therefore organised a huge election hustings meeting, inviting all the area’s parliamentary and council candidates to debate the future of the EMD Cinema in public. Under the banner ‘Vote Cinema’, the lively meeting was attended by more than 500 local residents – a turnout far outnumbering any other election event in the borough.

In April Locum Consultants inspected the EMD building and held meetings with council officers, UCKG and the McGuffin Film Society. Waltham Forest Council confirmed that no decision on UCKG’s planning application would be made until the outcome of the Locum investigation had been published.

In August the Locum report was finally released and firmly endorsed many of the arguments made by the McGuffin Film Society, concluding that the EMD was “probably the single most valuable asset Walthamstow has” while its revival would be “perhaps the only venture that could seriously put Walthamstow on the map as an evening destination”. The Locum report went on to recommend that the best option for the EMD would be the formation of an independent charitable Trust to secure and administer its long-term future. The full Locum report can be read here. The report’s recommendations led directly to the formation of Waltham Forest Cinema Trust, a not-for-profit organisation ready to acquire the EMD building for cultural use if a purchase became possible.

On Wednesday 18 May 2011 Waltham Forest Council’s planning committee met to reach a verdict on UCKG’s proposals. Amidst unprecedented scenes, more than 700 people attended the planning committee meeting at Walthamstow Assembly Hall to hear the debate and witness the vote.

Representatives from the McGuffin Film Society and Waltham Forest Cinema Trust spoke alongside Stella Creasy MP in support of the EMD’s revival while the church leaders delivered an angry defence of their scheme. At the end of the meeting, the planning committee voted to reject UCKG’s proposals. The decision was unanimous and supported by all political parties.

UCKG then contacted the government’s Planning Inspectorate to request a full Public Inquiry in order to challenge the council’s verdict.

2012 began with confirmation that the government would hear UCKG’s appeal and a Public Inquiry was scheduled for the early spring. The McGuffin Film Society immediately began promoting details of the appeal process and over 1000 written objections were submitted.

During preparatory meetings for the Inquiry, UCKG unveiled a hastily revised plan which now involved operating the EMD as a hybrid church-cinema. The government inspectors judged this was effectively an entirely new proposal and the Inquiry was postponed. UCKG was granted more time to formalise this proposal as yet another planning application which was delivered to Waltham Forest Council in June.

A further planning committee meeting at Walthamstow Assembly Hall was set for September 4 which again saw hundreds of residents gather in support of the EMD and UCKG’s schemes unanimously rejected once more.

As the Inquiry began, the Cabinet of Waltham Forest Council met on Tuesday December 4 and voted unanimously to support a Compulsory Purchase Order of the EMD Cinema if UCKG’s plans were rejected by the government. Although a CPO had been debated on many occasions in the past, this was the first time it had been formally adopted as council policy.

The Public Inquiry ran for a period of three weeks and evidence was heard from the McGuffin Film Society, Waltham Forest Cinema Trust and potential partners Curzon Cinemas and Soho Theatre.

In May 2013 the government announced that UCKG’s proposals to convert the EMD Cinema for their religious activities had been rejected.

In July 2014 Waltham Forest Council confirmed its intention to seek a Compulsory Purchase Order (CPO) to take control of the site if a voluntary sale did not take place. Four months later UCKG revealed they had begun negotiations to sell the EMD Cinema to the Antic Pub Collective.

We would like to thank the many hundreds of residents who have supported our campaign to revive the EMD over the last decade and helped us keep this issue at the forefront of the local agenda.

A complete history of the McGuffin Film Society and the campaign to save the EMD Cinema – with exclusive photos and film footage – can be found here.

Hundreds of McGuffin supporters gather outside the EMD to mark the fifth anniversary of the venue’s closure in 2008. 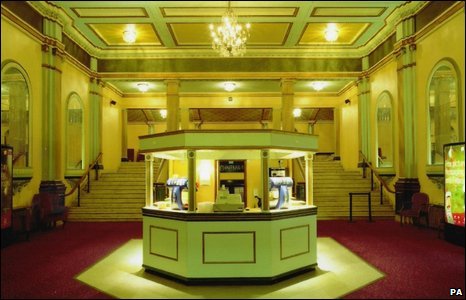